The Dog Ate WHAT??

The dog ate WHAT??

I arrived at work one morning and was told by our receptionist that there was a client on the way with his 5 month old Shepherd. She said they thought had eaten nails that had been laying around in the garage. When they arrived, I told them the best way to visualize what is going on was to take a radiograph (aka x-ray) of the abdomen, since metal objects appear very clearly and densely compared to regular tissue.
Here is the image I got: 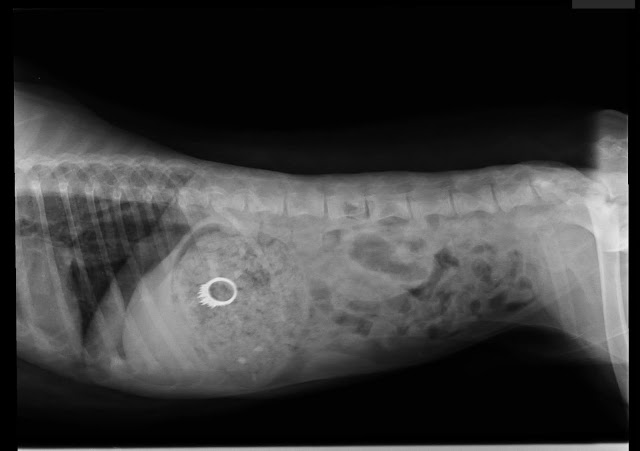 After the initial shock of learning his wife's engagement ring was in Jake's stomach, I told him we could retrieve it pretty easily. I gave Jake a drug that causes dogs to safely vomit within about 20 seconds. He preceded to vomit up his breakfast - and the diamond studded ring!

I love this radiograph so much because in all the years of taking x-rays, you never get one that so closely shows the object like this one.  Typically, all you will see a dense object and are unable to make out what it is because of the the angle being off or the inability to show it straight on, but this one was laying perfectly on it's side! A scary beginning made for a very interesting, and happy, ending!

Posted by Companion Animal Hospital at 8:00 AM